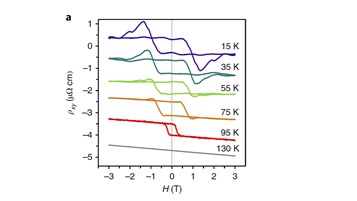 Written by Carme Gimeno on November 14, 2018. Posted in Latest Results

Strong electronic correlations can produce remarkable phenomena such as metal–insulator transitions and greatly enhance superconductivity, thermoelectricity or optical nonlinearity. In correlated systems, spatially varying charge textures also amplify magnetoelectric effects or electroresistance in mesostructures. However, how spatially varying spin textures may influence electron transport in the presence of correlations remains unclear. Here we demonstrate a very large topological Hall effect (THE) in thin films of a lightly electron-doped charge-transfer insulator, (Ca,Ce)MnO3. Magnetic force microscopy reveals the presence of magnetic bubbles, whose density as a function of magnetic field peaks near the THE maximum. The THE critically depends on carrier concentration and diverges at low doping, near the metal–insulator transition. We discuss the strong amplification of the THE by correlation effects and give perspectives for its non-volatile control by electric fields.