Written by Gervasi Herranz on April 20, 2018. Posted in News, Outreach

MULFOX group has been awarded with a MIT-Spain “La Caixa” Foundation Seed Fund. In a press release that took place on 18th April at Palau Macaya (Barcelona), the PI of the project (Ignasi Fina) was interviewed by local radio, and he commented on the new investigations on the use of semiconducting ferroelectrics for photoelectric applications that the funded project proposes. We hope fruitful collaboration with MIT. 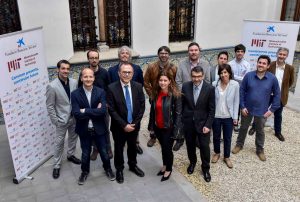 Read the news  appeared in the media: