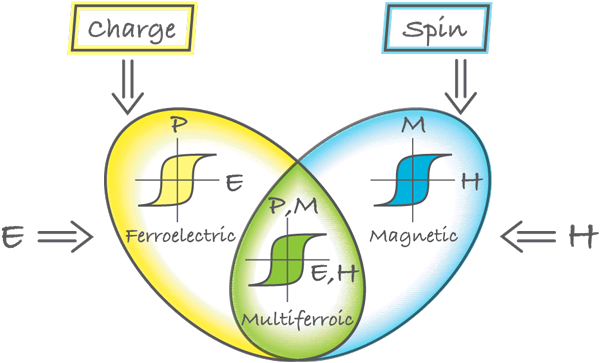 The cross-coupling between magnetism and ferroelectricity affords very promising avenues for the development of novel electronic devices. The feasibility of electrical control of the magnetization and viceversa, the control of the electrical polarization with magnetic fields, is the basic step towards new memories with multi-bit storage capabilities (in which the information is encoded by the magnetization and polarization states) or to dissipation-less operation of magnetic memories. We investigate both single-phase multiferroics as well as composite magnetoelectric materials in which magnetic and ferroelectric phases are coupled, either in 3D nanocomposites or 2D thin film structures. Our methodology is based on the study of magnetoelectric coupling exploiting advanced ferroelectric characterization under magnetic fields as well as magnetometry and magneto-optic imaging under electric fields.

Selection of our recent publications: