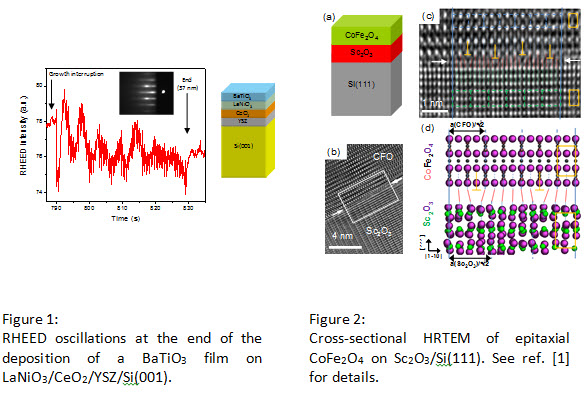 Silicon is the most fundamental technological material for electronics. At the same time, oxides display a remarkably variety of functional properties, including ferroelectricity or magnetism. Thus, a successful coupling of functional oxides with silicon has an enormous potential for new applications in electronics. A serious challenge issue is to match the dissimilar (structurally, thermally, and in general chemically reactive) oxides and silicon in hybrid structures. We have recently initiated the research on the integration of functional oxides on silicon, with focus on ferroelectric and magnetic oxides. For that purpose, we exploit atomic growth control with in-situ RHEED monitoring, as well as advanced microstructural (TEM) and functional (magnetic, magneto-optic, ferroelectric) characterization. Specific objectives in progress include integration of i) ultrathin (a few nanometer thick) ferroelectric perovskites and ferrimagnetic spinels on silicon, and ii) ferroelectric perovskites on silicon membranes.